Authors aren’t usually around to explain their intentions and thought processes to the people reading their books. But on Thursday, students at Hackett Middle School met, learned from and talked writing with the award-winning writer of the novel they’re reading in class.

Ann Burg, author of “All the Broken Pieces,” met with eighth-graders in Jaclyn Rancourt’s English Enrichment class who are reading that book.

Burg told the class that she originally wrote the book in verse form, was told by an editor to change it to prose. She rewrote the entire book, only to have the same editor reject it outright.

Another editor loved the book in verse form, and it was published to rave reviews.

Among its many accolades, “All the Broken Pieces” was considered a Best Book for Young Adults by the American Library Association, won the 2010 Jefferson Cup, and made the 2009 Booklist Top Ten in two categories: First Novels for Youth and Historical Fiction for Youth.

“Every one of you has a dream, and only you can make that dream come true,” she said. “Don’t let anyone tell you what you think and feel.”

Burg discussed the process she went through to write the book, and her writing process in general. She and the students went on to discuss the novel, the story of a 12-year-old Amerasian boy who was born in Vietnam but is living in the United States.

Students each received their own copy of the book after her visit. 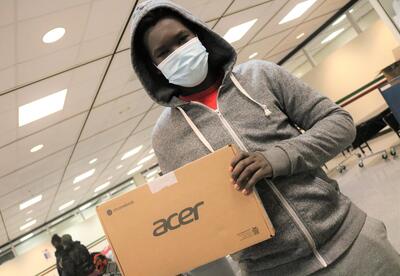