A record number of voters gave near-record approval to the City School District of Albany’s budget proposal this year in an historic and challenging vote conducted entirely by absentee ballot.

“We are grateful to our community for providing this overwhelming support for our students and our school district during these very challenging times,” said Board of Education President Anne Savage. “We know that this budget was hard to swallow – every board member shared that feeling.

“But we believe it truly is the best we could make of a very difficult situation given the intense fiscal pressures we and all New York school districts are facing. We are glad that our community agreed.”

The $261.6 million budget for 2020-21 passed with 74% approval in unofficial returns. That would be the second-highest approval percentage in the district’s history, behind only the 75% approval for the 2017-18 budget, and the fifth time in six years that approval has topped 70%.

The district received 10,695 ballots and hand-counted them Tuesday night and Wednesday morning. It was by far the highest participation ever for the district, which held its first budget vote in 1997.

“As we move forward, it is important to note that we will continue to be focused on how we can make difficult decisions in the best interest of our students and remain fiscally responsible,” said Superintendent Kaweeda G. Adams.

“These are challenging times; however, we have worked collaboratively and within our means to support instructional programs and look at creative ways to adjust the delivery of our programs and services for our students and families.”

Voters also passed Proposition #2 with 85% approval. That proposal allows the district to purchase a small piece of property adjacent to Delaware Community School for $13,300. The property will be used to create additional recreational space for students. The purchase will have no impact on taxes.

Board of Education member Hassan Elminyawi won a full four-year term, earning 49% of the vote in a three-person race with Victor Cain (25%) and Edith Leet (26%). Elminyawi, who the board appointed last year to fill the final months of a vacant position, will begin his first full term on the board July 1.

The budget approval provided a positive end to a difficult budget cycle.

The proposal that the board approved unanimously in May included the elimination of 142.6 positions, about 8% of the current workforce. Those reductions will return district staffing to the levels of the 2016-17 and 2017-18 school years, when district-wide enrollment was about 5% higher than it is today.

The district began the budget-development process in January with a $15 million gap, which was exacerbated by the severe fiscal challenges that the COVID-19 crisis has presented for the state.

The district lost nearly $2 million in state aid revenue – and potentially more – following the onset of the pandemic in March. The potential for additional cuts to school aid for all districts statewide remains a possibility this summer and during the 2020-21 school year.

The budget will maintain most of the district’s current programs and services for the 2020-21 school year. However, there will be reductions due to the staffing adjustments.

These include larger class size caps at the elementary level, reductions in supports to general education classrooms, reductions in instructional coaches and elimination of the district-wide second-grade swimming program.

Elementary instrumental music lessons, which currently begin in third grade, will begin in fourth grade in 2020-21. The boys’ and girls’ freshman basketball teams at Albany High School will be eliminated, along with the boys’ modified-9 soccer team.

For more information about the budget, please read our “Capital Education” budget edition.

It was the first time that the budget vote was conducted entirely by absentee ballot following Governor Cuomo’s order in May that all New York school districts would conduct their budget votes that way due to the COVID-19 crisis.

Unknowns due to COVID-19

The budget approval removes one variable in the district’s planning for next school year.

Like all districts statewide, the district is planning for 2020-21 in an uncertain environment due to the continued COVID-19 crisis. As it does every year, the budget represents a spending cap for the school year ahead. Districts have flexibility to allocate funds within that amount depending on student needs.

That flexibility could be more important than ever for school districts in 2020-21 if the state announces more funding cuts, or if COVID-19 continues to limit a full return to school buildings.

Regardless of these uncertainties, the district remains committed to the academic and social-emotional well-being of all students.

Board seeks feedback on proposed 2020-21 Code of Conduct 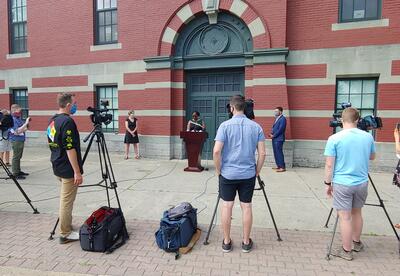