Dr. Richard Alfred tends to the injuries of athletes, including those from his alma matter.

After graduating from Albany High, Alfred went on to graduate from Harvard University and Albany Medical College.

President Barack Obama, on April 12, 2012, nominated career Senior Foreign Service Officer Gene A. Cretz to be the Ambassador of the United States to Ghana.  The appointment was confirmed by the Senate on August 2, 2012 and Ambassador Cretz was sworn-in by Secretary of State Hillary Rodham Clinton on September 11, 2012.

Ambassador Cretz hails from Albany, New York, and attended the University of Rochester, graduating in 1972 with a degree in English Literature.  He later received a Masters of Science Degree in Linguistics from the State University College at Buffalo (1975).

Ambassador Cretz served as a Peace Corps Volunteer in Kabul, Afghanistan from 1975-1977, and joined the Department of State in March 1981.  His first Foreign Service tour was as General Services Officer and Consular Officer in Islamabad, Pakistan (1982-84).  He then returned to Washington and served one year in the Operations Center and one year as Staff Assistant in the Bureau of Near Eastern Affairs (NEA).

His second Washington assignment was in the Bureau of International Organizations, as the officer responsible for Middle East Affairs at the United Nations.  From 1998-2001, he served in Beijing, China, where he was in charge of China's External Affairs portfolio.  In 2001 he transferred to Cairo, Egypt where he served as Minister-Counselor for Economic and Political Affairs.

On July 11, 2007, Ambassador Cretz was nominated by the President to serve as U.S. Ambassador to Libya and the appointment was confirmed by the Senate on November 20, 2008.  While awaiting Senate confirmation, Ambassador Cretz served as the NEA Bureau’s Deputy Assistant Secretary for Egyptian, Israeli-Palestinian, Jordanian, Lebanese and Syrian Affairs and assumed responsibility for Maghreb and Arabian Peninsula Affairs in August 2008.  Ambassador Cretz served in Libya from December 2008 until May 2012.

Ambassador Cretz speaks Dari, Urdu, Arabic and Chinese.  He is married to Annette Williams, and the couple has two adult children, Jeffrey and Gabrielle.

Harriet Gibbons taught music and African-American history in the Albany public schools until 1974, when she was tapped to serve as principal at Street Academy, then Albany’s alternative high school. Gibbons was a beloved leader who was firmly committed to the concept of alternative education and its emphasis on small classes and individualized instruction.

From her city position she went on in 1985 to direct the affirmative action office at the New York State Department of Health. She retired from the health department and the school board in 1989.

She suffered a stroke in October 1991 and died the following April from complications. She was 68. In her honor, Street Academy was renamed Harriet Gibbons High School, a name it held from 1992 until it closed in 2010.

As a four-year varsity starter in basketball, Carolyn Gottstein held the school scoring record of 2,020 points, averaging 22 points per game. She also held the school record for shots blocked with 383, for an average of 4.2 per game.

She was a Street and Smith high school all-American and in her senior year was named top player in New York state, earning the title Miss Basketball New York State 2000. She went on to earn her bachelor’s from Boston College, a master’s in marketing from Bentley University and an MBA from Boston College. Now Carolyn Gannon, she is a marketing analytics consultant in the Boston area, where she lives with her husband Brian.

As an Albany student, Shawn Hamlin spent plenty of time in district classrooms, including one that fueled an interest in what later became his profession – design and architecture.

After graduating, Hamlin returned to Albany public school classrooms, this time as an architect. He designed the award-winning Philip Schuyler Achievement Academy. He also played an important role in creating the plan to rebuild or rehabilitate district elementary and middle schools in a decade, and served as the district’s senior architect from 2001-05.

Hamlin also was the managing architect for the acclaimed renovation of William S. Hackett Middle School. During his career he has participated in planning for the proposed Albany Convention Center, designed award-winning parking structures for the State University of New York Administration building and Albany Airport, and led the planning of Syracuse’s $180 million school-renovation project.

Hamlin now is managing principal of his own firm, Hamlin Design Group. Based in Albany, the firm has sponsored internships for scores of Albany High students interested in architecture and design.

Don Prozik began his career in Albany public schools as a math teacher at William S. Hackett Middle School, where he spent 18 years. While there, he received a PTA Honorary Life Membership, the Presidential Award for Excellence in Mathematics Teaching and an Excellence in Teaching Award.

From 1991 to 2005, he was assistant principal at Harriet Gibbons High School, where he was responsible for developing programs for at-risk students. He also instituted community partnerships with groups including the School and Business Alliance Program, Senior Citizens Home Program, Equinox and the YMCA. He received a WTEN Educator of Excellence Award in 2002 for these efforts.

In 2005 he served as principal at Abrookin Vocational-Technical Center (now Abrookin Career and Technical Center) and retired in 2006. He came back from retirement to serve as Abrookin’s interim principal for the 2006-07 school year.

Prozik also was Albany High’s soccer coach for 16 years, transforming the team into Big 10 champions. In 1983, he received the Section II Soccer Coach of the Year Award. He also was an active volunteer for Albany Youth Soccer.

In addition, he also is a decorated lieutenant colonel in the Army who served in the Gulf War.

His history with the district began in 1962 as a summer school teacher at Giffen Memorial Elementary School. He went on to teach at what was then the Academically Talented Program at Hackett Junior High School. He also was a backfield coach in football at Philip Schuyler High School.

In 1963, Trant was elected president of the school board of Common School District 13 in the town of Bethlehem. In 1967, he was instrumental in getting land annexed from that district to the Albany school district, one of the largest land acquisitions ever made by the city of Albany.

He was appointed during fall 1967 as assistant housemaster of the Albany High School Annex, then a building of 10th-grade students. During the next several years, he expanded the school by adding grades 11 and 12. He also instituted Advanced Placement classes, college-level courses and work-study programs for students during that time.

In 1980 he was appointed principal of Opportunity School 21 and in 1990 became principal of the Street Academy of Albany. Under his leadership, he moved both Street Academy and the Albany High Annex to the former Our Lady of Angels School and changed the name to Harriet Gibbons High School. In his five years as principal, the student graduation rate was 100 percent.

He retired in 1995 and went on to run for and be elected to the Albany Board of Education.

Ysanne Williams was a three-time state champion in the 400 meters and 800 meters during her time at Albany High School.

As a junior at Albany High, she was second in the 400 meters at the U.S. Juniors, and at the National Scholastic Indoor Championships she placed fourth in the 400 and seventh in the 800. As a senior, Williams was the fourth-fastest American high school student-athlete in the 800 and ranked No. 17 nationally in the long jump. She represented the United States at the 1997 Pan American Junior Championships in Cuba, placing sixth in the 400 and winning a bronze medal as a member of the 4x400 relay team.

She accepted a full track scholarship at UCLA, where she went on to earn All-American status multiple times throughout her career. She was the 800-meter champion at the Pan American Junior Championships in 2000, and in 2008 she competed for the Jamaican Olympic team in the 800 meters.

After graduating from UCLA, Ysanne went on to earn a master’s degree in elementary education from Grand Canyon University. She currently is a sixth-grade reading teacher in the Lubbock, Texas, area and expects to complete her doctorate in educational administration by next year. 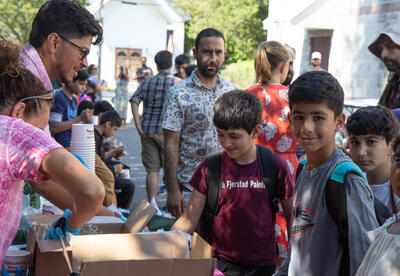